Ponies and the Pleistocene--Nursery Herds 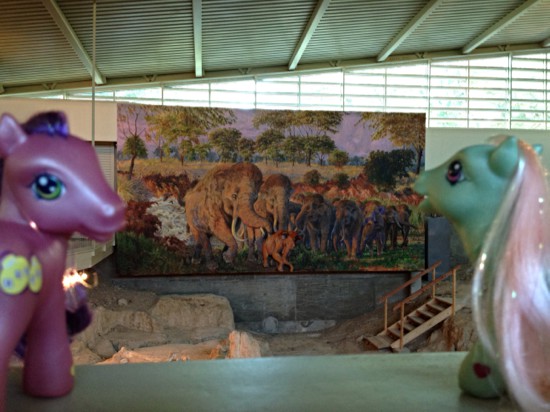 Excavation began at the Waco Mammoth Site in 1978 after two young men brought a bone they discovered to Baylor University's Strecker Museum. As bones were uncovered, details emerged. Many Columbian mammoths were buried together, mostly adult females. Buried with them were three mammoth calves. The site had something unprecented—a family.

Elephants are matriarchal, with females staying in a familial group called a nursery herd. Protected by their matriarch, they help their sisters and cousins raise their young. The Waco group is one of only three nursery herds known to exist today, the others being woolly mammoth herds in Siberia and Serbia. The Waco herd is Columbian, and it was discovered first.

The herd perished in a flood and were buried at this site, which sits between the Bosque and Brazos rivers. Later, other groups of animals died in floods and were buried in the same place, one group stacked above another.

Minty and Kimono are looking at a mural of the Waco herd, which hangs above the bone bed.